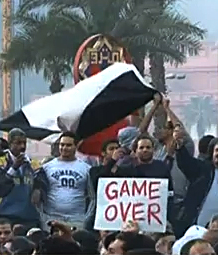 They say when your in the middle of an event, you don’t realise what a key part it will play in the future. I’m guessing when my Grandad was in the Navy in world war II they bared no thought about how in years to come kids would be learning about it in history.

Although not on the same scale as world war II, but just as world changing, I believe we are in the middle of one of these times. The internet has had its first technological revolution, with facebook twitter and youtube playing an integral part in freeing Egypt from the corrupt reign of Mubarak. I remember speaking to a taxi driver in Egypt only a few months before everything kicked off, he was telling me all about the countries corruption and how he did not know what would be happening in the next election. Little did I think then that the very entity I work on, spend every day on, and pays my wages.. the internet, would be the very thing to help free them a few months later.

From my previous blogs such as ‘rise of the honest open internet‘ it’s clear I have high hopes for the way the net will change humanity, and its still young. Yet I feel we are slap bang in the middle of the of the first step to change .

Following the events in Egypt one couple even named their daughter ‘Facebook’. Now Libya have risen up with the same power of the people through the use of the internet, currently in the midst of a similar protest against their corrupt leader Gaddafi.

Gaddaffi has even made his own poor attempt at convincing the public by faking films of supporters cheering for him and claiming those against him have been forced drugs and alcohol. Through TV media this may have worked but with the power of social media and a public voice this is has just made him look even more stupid.

This is a great time to be in, and I have a feeling the Internet still has a few tricks up it’s sleeve for the future of the human race.

Web-wizardry from the master.. apparently