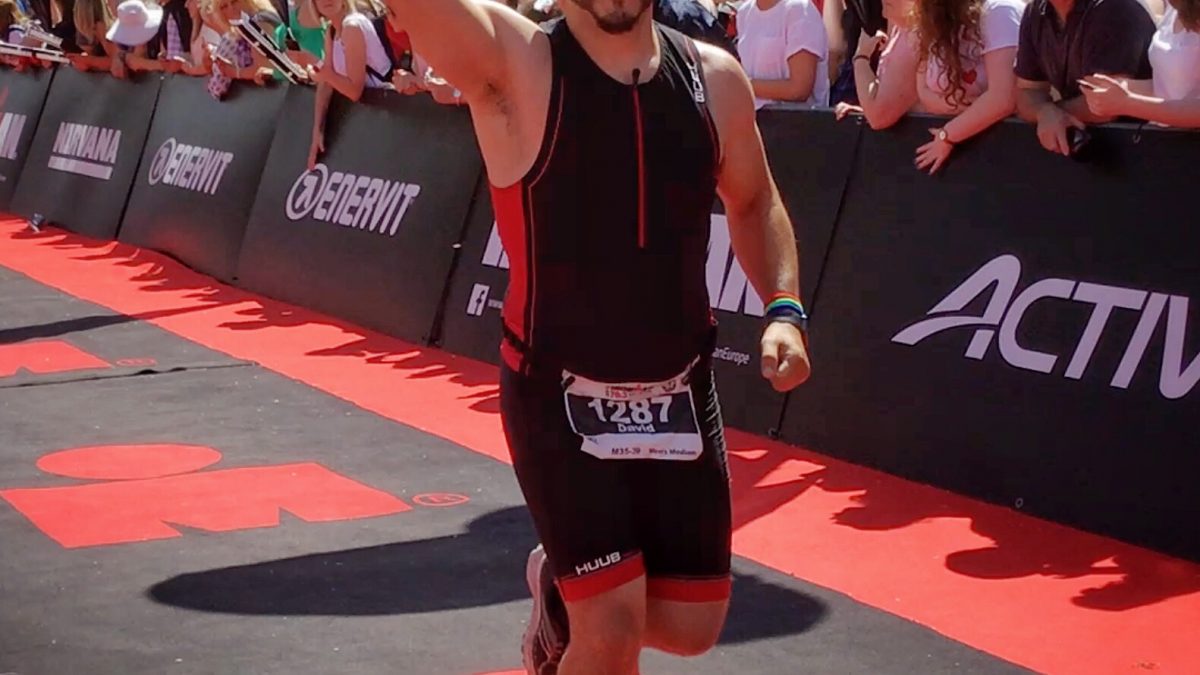 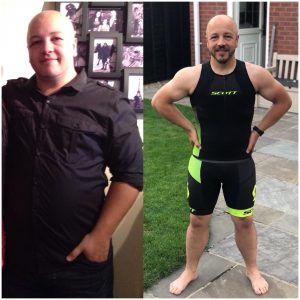 So 12 months ago I was 16 stone, out of breath chasing my 2 year old around and decided I needed to do something. In the entire process I am now down to 12 stone (4 stone loss)

The Staffordshire 70.3 UK Ironman bike route goes straight passed my house and the swim is in Chasewater lake just down the road from me. For the past couple of years I had watched all those ‘nutters’ come past thinking what an amazing achievement it must be and that I could never do anything like that. Then last year I started to think, well maybe.. just maybe.. I could!?

Seeing them is really what initially inspired me to start doing my own bit of exercise. I started swimming once a week and remember managing 4 lengths on my first go before being completely out of breath. I got back on my old mountain bike a few times a month too and just headed out to have a good time.

I enjoyed both the swimming and the biking so It got to the point where I was then swimming 3 times a week. I was now doing a lot more lengths (although still breast stroke) and out on the bike once or twice a week too. I built up my own level of basic fitness doing this over the course of the first 6 months doing this. Whilst the Ironman 70.3 was still lurking in a dark place somewhere at the back of my mind but never really believing it may actually be possible.

I happened to mention to a friend that I might consider doing one and she said her PT does a lot of them and trains people if I wanted to arrange a chat.. so I did. This was 7 months ago.

I sat down with Sam Coxon in November 2017 where I told him that at some point maybe 2019 I was thinking of having a go. After questions about my current exercise etc, Sam was confident I could be ready in 6 months for 2018. I thought he was mad, but what had I got to lose. So scared as hell I bit the bullet and bought my entry ticket.

I then followed his strict training plan over the past 6 months. I had never ran more than a mile before in my life and I hated running! So the running was a core element to build on. At first I really wasn’t enjoying running at all but I stuck at it. Then a weird thing happened, after 3 months I started looking forward to my next run session and enjoying it, madness! I bought a road bike and felt ridiculously unstable compared to my mountain bike so that was a steep learning curve too. I also had to move from my comfort of breast stroke in the pool to learning front crawl and open water swimming. Luckily I live next to the lake so headed down to the open water swim sessions there twice a week.

Fitting training in was hard alongside running a business and looking after a 2 year old. So I woke up early and trained before work, did pool swim sessions on my lunches and headed out for runs or bike rides after the little one was asleep of an evening. I managed to cram in 2 to 3 hours on a Saturday and Sunday too.

I practiced my transitions. I had advice from my PT and also read a lot into it on here and youtube etc but in the end decided to keep it real simple (not sticking my shoes to the bike, or and anything that may cause me additional stress) I would be happy just to finish, so I wasn’t out to save a few extra seconds here and there.

The training just seemed to increase naturally and before I knew it I was doing brick sets with the full swim and bike, or practicing the full run course. It suddenly felt normal and natural and I couldn’t remember ever not being able to do that (until I look back now).

A total of 12 months exactly from being inspired I was ready.

The swim was delayed by an hour due to sudden drop of fog across the lake which did wonders for my nerves! It was too dangerous and everyone was just stood around in the queue for the swim waiting for it to clear. Then the speakers kicked in saying it was safe and we were off, Thunderstruck by ACDC started blaring and got me pumped again.

I took my PT’s advice and found my own spot outside of the washing machine where I could feel comfortable and managed to complete the 1.2 mile in 00:43:27. 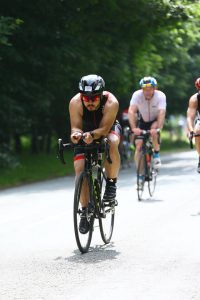 The first corner I had to dodge a poor lady on the floor covered in blood surrounded by ambulance crew, my heart felt for her whilst this also added to my own nerves. Then something come over me and I was on a mission. I felt like I was overtaking everybody. I don’t remember many people coming past me at all and I was just purely pumped going past bike after bike. Even passing some real nice TT bikes, on my Scott Road Bike with Aero bars fitted and light weight DT Swiss wheels. I was loving it.

There are 2 key tricky points on the route. The first is steep downhill into a blind left turn with a sudden steep incline, but I had practised the course over and over and I was down a gear ready. I weaved amongst a number of people that obviously hadn’t done the route as they either came to a sudden stop or clunked through the gears fighting their way up.

The second tricky point is another sharp left after a long fast down hill (preceded by the biggest incline on the route, so it is a welcome rest) however here is where the course loops back on itself so you are taking a fast sharp left whilst bikes are still coming the other way turning right ready for the uphill.

Overall the bike course is a great route, through nice country villages, across a beautiful reservoir (with a sunken town underneath) and through the Cannock Chase country side on into Stafford town centre.

In the transition I was dying for the toilet so I ran into a portaloo for a quick rest stop which added to my T2 time but totally worth it! 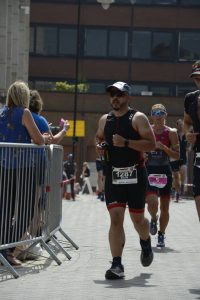 This was never my strong point and is where I really started to slow down. All those I passed on the bike started to come back past me again now. In training and brick sessions I was running around a 9 minute to 9:40 pace. Off the bike, my pace started around 8:50 then over the course slowly dropped to 11:00 which is when I stopped looking and just kept moving.

The heat was intense and I again dodged a couple of people who had passed out as well as overtaking people who had once come past me but were now clearly limping from cramps. The crowds in town were great for spurring me on as well as seeing my friends and family and In think that’s what really kept me going. There were kids with water pistols and old guys in their yards spraying everyone with hoses which was an awesome help too as well as obviously the refreshment from all the amazing volunteers.

The course was 3 laps around the town and the adjoining park, so on each lap we went into the marked lane to pick up a coloured lap band, and the time seemed to fly by. Before I knew it I was picking up my last band with just over a mile to go. Then rather than turning right for another lap I was round the left for the home straight. I remember crossing the finish and looking at my time to see 6:20, then just starring at it wondering if it was correct. All along I said I’d be really happy to do it in 7 hours for my first ever event of its kind. So although I know the time may not be amazing to most, I was personally was over the moon.

I had eventually completed the run in 02:27:28, it was always my weakest of the three so I was not too disheartened that I hadn’t hit my usual pace. 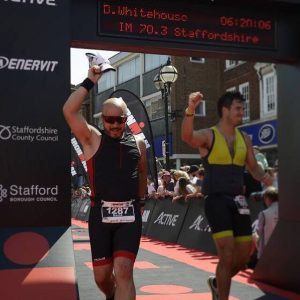 The single biggest thing I took away from the event was the amount of support from the volunteers, crowds and general public in all of the little villages and around the town centre along they way. Old people outside their houses ringing bells and cheering, kids reaching out for high fives, people I have never met reading my BIB and cheering my name! 2 old guys on ladders over a hedge in their garden spraying all the runners with hoses in the heat. This was all amazing and very inspiring to me.

So now… I am very proud to say I am one of the ‘nutters’. 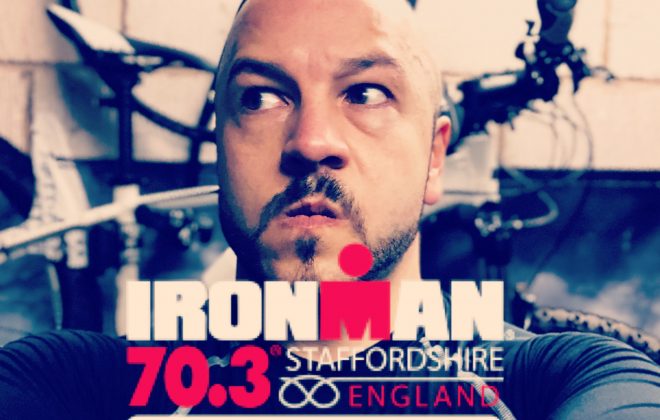 Week 19 Training – Stepped up a notch! 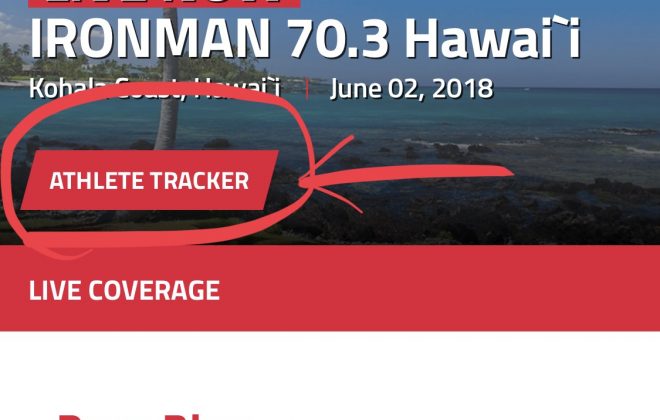 Iron Man Triathlon – How to track friends and family